Start - Aktualności - The final of the Silesian edition of the Three Minute Thesis® is behind us! 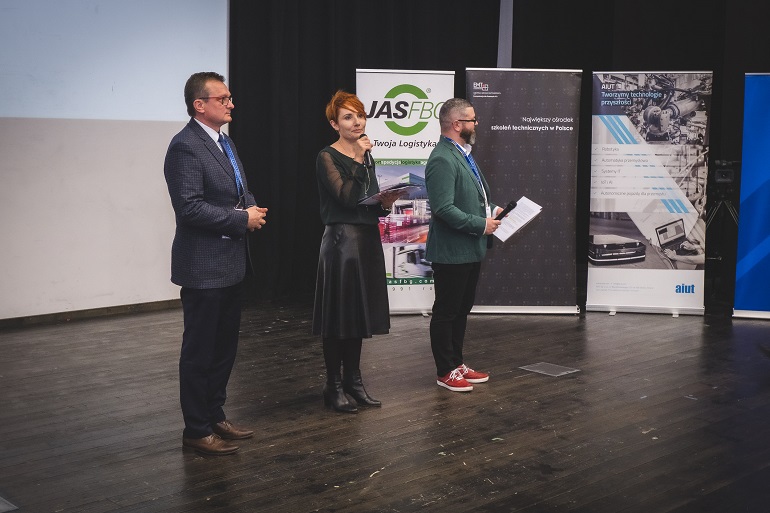 The final of the Silesian edition of the Three Minute Thesis® is behind us!

How to use virtual reality in dental treatment? What is the power of lightning locked in a box? How to deal with environmental pollution in a way it does not threaten human health? These are just some of the questions addressed in 3 minutes by young scientists - the finalists of the Silesian edition of the Three Minute Thesis® 2021.

To present scientific issues and concepts so that it is comprehensive for a wide audience is not an easy task to do. Especially when it has to be done in 3 minutes. That is how much time young scientists, participants of the Silesian edition of the Three Minute Thesis® 2021 had to present the topics discussed in their doctoral theses.

Ten young scientists entered the finals. On 19 November, in front of the audience gathered in "Mrowisko" Students’ Culture Centre and the audience streaming on the YouTube channel of the Silesian University of Technology, they took up the challenge of telling about their research.

The final presentations were judged by a jury composed of: Professor Tomasz Francuz, Professor Adnrzej Katunin; Professor Katarzyna Sujkowska-Sobisz, and Natalia Osica MSc. Additionally, participants could also compete for the audience award, as well as the engineering prize.

The first prize of PLN 5,000 funded by JAS-FBG, was awarded to Joanna Ryszka from the University of Silesia. In her doctoral dissertation, she investigates the impact of British-Japanese relations on the status of Japanese borrowings in British English and the way the British speak about Japan. - As the relationship changed, so did the narrative, that is, how the British spoke and wrote about Japan.

Additionally, this had an impact on the state of borrowing from the Japanese language. When there were no relations - there were no borrowings. When the war heated up - the British started to speak badly about Japan more often. And in turn, the warming of relations was the understanding and the entry of such words as ikebana, sushi, ninja or karaoke into the general language," explained Joanna Ryszka during her speech.

The second place was awarded to Kamil Korus from the Faculty of Civil Engineering from the Silesian University of Technology, who received a financial award of PLN 3,000, funded by the AIUT company. The finalist presented the topic "Dear Bridge, let me know you better! Digital twins of bridge structures". - We must remember that although bridges look monumental and static, they are actually alive all the time. They are constantly reacting to various loads and external factors.

The bridge can be monitored by various types of equipment - from simple deflection sensors to satellite scanners - explained Kamil Korus. - Thanks to these sensors the model of the bridge is constantly updated. Such a model living together with the real object is considered to be its digital twin.

A doctoral student from the Faculty of Civil Engineering at the Silesian University of Technology has also received an engineering award sponsored by EMT-Systems.

The third award of PLN 2,000, sponsored by the Katowice Special Economic Zone, went to Joanna Chwał from the Faculty of Biomedical Engineering at the Silesian University of Technology. The doctoral student raised the "burning" problem of e-cigarettes on the example of problems faced by the main character of her story - Albert the dragon. - My research will be conducted in three groups: two experimental groups - i.e. persons smoking electronic and tobacco cigarettes - and a control group, i.e. non-smokers. I will perform three measurements of respiratory and cardiovascular parameters. Moreover, the tests will be carried out with the use of a treadmill," said Joanna Chwał.

This finalist was also distinguished in the audience voting, receiving an award funded by the "Forum" Shopping Centre.

The excellent speeches given by the competition finalists are yet another proof that young scientists want to talk about science in "layman’s terms" and engage a wide audience in scientific issues. Presenting doctoral topics in a way that is comprehensive to many people also provides an opportunity to convey the value and explain the importance of work to the general public.

Three Minute Thesis® is a competition initiated by The University of Queensland. The Silesian University of Technology hosted its 4th edition.

The event was organised by the Science Popularization Centre at the Silesian University of Technology and the University Council of Doctoral Student Self-Government. Honorary patronage was taken by the Council for the Promotion of Science, at the Polish Academy of Sciences. In addition, the competition was held under the patronage of the Mayor of Gliwice, and Pro Science was a partner. The following companies funded the prizes: JAS-FBG, KSSE, AIUT, EMT-Systems and CH "Forum". The sponsor of the book prizes was the Helion Group.

We invite you to watch the speeches of the participants of the Silesian edition of the Three Minute Thesis®, which are available on the YouTube channel of the Silesian University of Technology, and a photo gallery published on the Science Popularization Centre website.