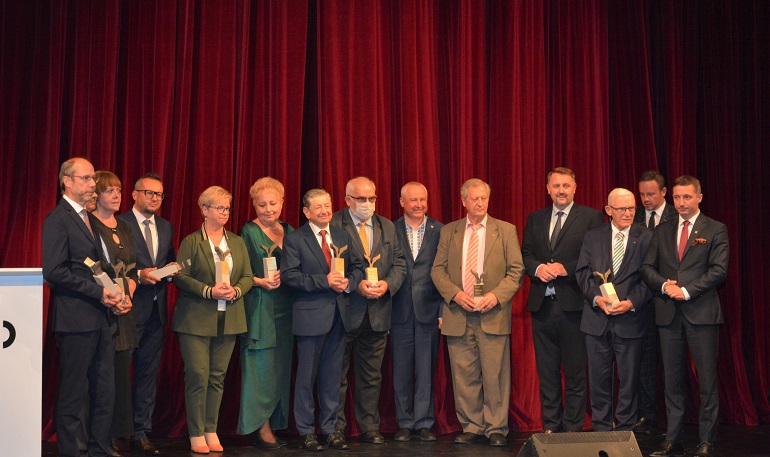 On Thursday, September 2, at the Teatr Polski (transl. Polish Theater) in Bielsko-Biała, there was a ceremonial awarding of the Laurels of the Śląski Związek Gmin i Powiatów ( transl. Silesian Union of Municipalities and Districts), attended by the Vice-Rector for Coollaboration with Civic and Economic Environment, prof. Janusz Kotowicz. The Vice-Rector received the Laurel for the Silesian University of Technology in the "Special Award" category - for the merits of our University for local government cooperation, especially in the last five years.

The Laurels are a form of appreciating a special, long-term involvement in the activities of the Union and are awarded to local government employees of municipalities, communes and district authorities that are members of the Union, as well as institutions of various levels and organisations and other persons.

Vice-Rector Janusz Kotowicz, also as a member of the Regional Energy Council, actively cooperated with representatives of the Silesian Union of Municipalities and Districts, engaging in joint ventures, organizing events and conferences hosted by the Silesian University of Technology. The most important ones include the conference Energy Union - implications for Poland, the conference New technologies in public bus transport and four meetings of the Regional Energy Council.

The ceremony was the first edition of the Laurels, and the award will be granted periodically, every 5 years. The gala took place on the occasion of the 30th anniversary of the Silesian Union of Municipalities and Districts. The programme of the event included a session of the General Assembly and a meeting entitled "Self-government past and present". The jubilee itself was held under the motto "PRESENCE - FUTURE - SELF-GOVERNMENT".