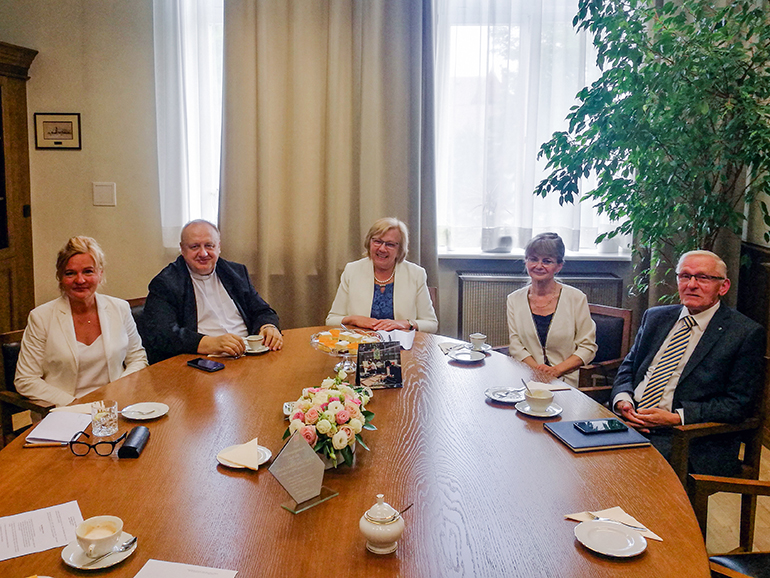 On Monday, 6 June, the Zabrze City Hall hosted a meeting of the chapter of the Saint Camillus Award, granted by the City of Zabrze. It was attended by the Vice Rector for Collaboration with Civic and Economic Environment, Professor Janusz Kotowicz.

The Chapter consists of:

Mayor of the City of Zabrze – Małgorzata Mańka-Szulik, PhD

The Director of the Municipal Centre for Family Support – Danuta Dymek

Priest of the Parish of St. Camillus in Zabrze – Rev. Wojciech Węglicki

The Saint Camillus Award was established in 2001 to honour people, institutions, companies, organisations and social associations who, through their long-standing social activity, have gained the gratitude and respect of the residents of Zabrze and, through their various activities, work for the benefit of the city, build its positive image and are involved in activities for its residents. The Award is granted by the Chapter.

Apart from the membership in the chapter of the award, Vice Rector Professor Janusz Kotowicz is also a member of the chapter which granted the title of Honorary Citizen of Zabrze in May this year. This title is conferred on persons making a special contribution to the life of Zabrze or those who, thanks to their achievements, have contributed to the growth of the city's national and international significance.

The gala event announcing the winners of the Saint Camillus Awards will take place in July this year.