Start - Aktualności - EURECA-PRO Review Week has come to an end 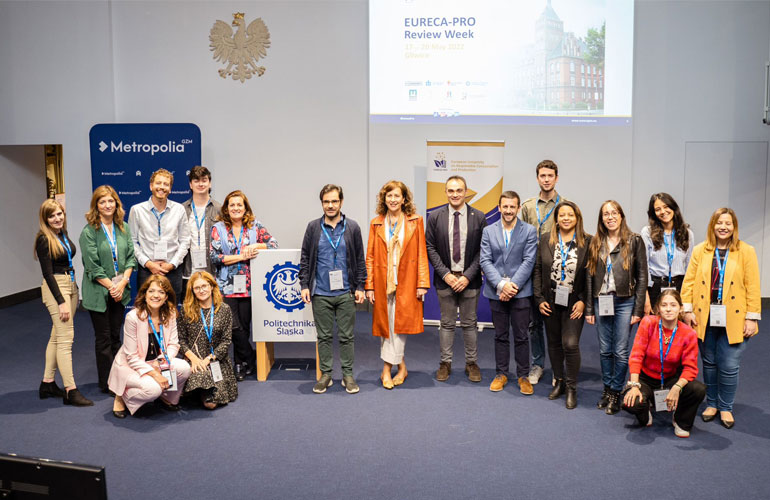 EURECA-PRO Review Week has come to an end

Plenary sessions, Board of Rectors, thematic discussions and less formal events - were on the agenda of the international EURECA-PRO Review Week, which took place from Tuesday to Friday at the Silesian University of Technology.

Gliwice welcomed over 140 persons - Rectors of partner universities, scientists, students and administrative officers of eight European universities associated with the EURECA-PRO consortium. It is already known that another severe academic centre will join the consortium.

- (…) As a result of several months of efforts by the Silesian University of Technology, the will to further expand the consortium was expressed to include the University of Lorraine, a prestigious French university with over 60,000 students, formed by the merger of four universities, with its main campuses in Nancy and Metz. Once the formalities are completed, the extension of EURECA-PRO is planned for this autumn. It will open many new opportunities for our researchers and students, said Vice-Rector for Science and Development, Professor Marek Pawełczyk, the EURECA-PRO project manager at the Silesian University of Technology.

The main objectives of the EURECA-PRO Review Week were to summarise the joint tasks carried out within the consortium and discuss plans for the near future.

The Review Week agenda included the Board of Rectors, a meeting of the Educational Council, and a panel of the Research Task Force.

- (…) The meetings were held in the form of workshops, during which the principles of the university's work were developed and established, rules of procedure were adopted, common study programmes and other offers for students and doctoral students were discussed, and teams of researchers focused on five areas were launched, said Professor Marek Pawełczyk.

- (…) the efforts to increase the international visibility of the partner universities and the European University as a whole in terms of research and education were an important part of the event. Mr Michael Lubacz - Director of Business Development, Times Higher Education, Ms Vanessa Debiais-Saintoin - Head of Higher Education Unit in the European Commission, responsible for the higher education sector, including European universities, provided valuable advice - added Professor Pawełczyk.

On Thursday, the Rectors of universities associated with the EURECA-PRO consortium visited the Academic Aviation Training Center of the Silesian University of Technology in Gliwice. The guests had familiarisation flights in the company of instructors on AT-3 aircraft, which are part of the Center's equipment.

On Thursday, intercultural workshops also were held, and students visited, among other things, laboratories of several faculties of the Silesian University of Technology.

The day before, on Wednesday, the EURECA-PRO Review Week side event took place; prepared by the Science Popularisation Centre of the Silesian University of Technology - "We support sport scientifically". The academic community also got a chance to see the post-competition exhibition of ECO with EURECA made by children and young adults.

Participation in the EURECA-PRO consortium is beneficial for students, researchers and doctoral students of member universities. Students can participate in joint study programmes, benefit from classes organised by lecturers from other countries at partner universities. Doctoral students can participate in mutual programmes, while researchers can implement various European programmes and jointly apply for funding