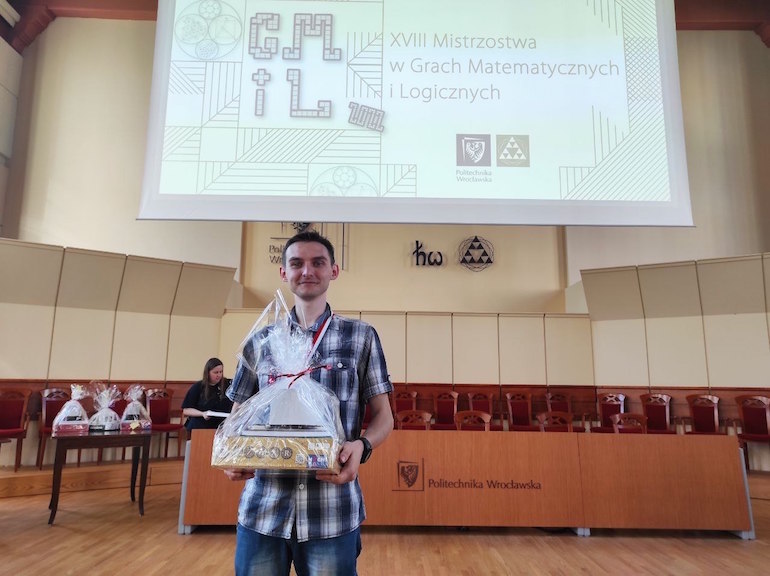 Beniamin Stecuła MSc, Eng. from the Faculty of Applied Mathematics, took the 2nd place in the Polish Championships in Mathematical and Logical Games and in August will represent Poland in the International Championships in Switzerland.

The final of the Polish Championships in Mathematical and Logical Games was held on 14-15 May in Wrocław, after a three-year break caused by a pandemic.

- Despite several years of break in the organization of the competition, the level was very high and the tasks were difficult, but very interesting. I did not expect such a high turnout, because only in my category over 50 people were qualified for the final," said the Polish Vice-Champion.

The two-day final included a total of 6 hours of struggling with 36 mathematical logic tasks of increasing difficulty.

- The tasks are arranged in an order of increasing difficulty, from the primary school level, where, for example, it was necessary to count how many non-overlapping triangles can be drawn using 6 vertices, to tasks based on graph colouring theory, recursion, permutation and geometry - he explained.

More than 50 people from all over Poland qualified for the most difficult HC category, i.e. people professionally involved in mathematics. Beniamin Stecuła MSc, Eng. finally came second and will represent Poland in international competitions in the summer.

The World Championship in Mathematical and Logical Games is organised by the Swiss organization FÉDÉRATION SUISSE DES JEUX MATHÉMATIQUES and will be held at the end of August in Lausanne. In the final stage, apart from Poland, there will also be representatives from France, Switzerland, Canada, Tunisia, Algeria, Spain and Italy.

Congratulations and we wish you continued success!