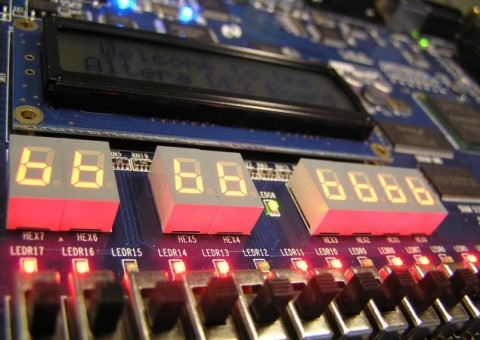 Industrial control systems require the use of advanced and high-performance controllers (PLC). The control system must assure an almost instant response to input signal changes. The classic approach of computing control signals is based on serial-cyclic execution of the control program. An instruction performs an elementary operation. To implement desired control activity a program consisting of many instructions must be executed. The program execution requires a relatively long time. It also determines the response time of control systems to input signals changes.

The main goal of carried out research works is the development of synthesis and technology mapping methods dedicated to fast control system implementation. The input program is given using a set of standard languages according to standards IEC61131-3 and IEC61499. The user delivers a standard program that is automatically translated into the respective hardware structure. The program implementation process consists of multiple steps. During implementation, different optimization approaches can be considered e.g.: reducing response time, consumed power, or occupied space on a silicon die. The main goal is delivering high-performance control systems including multithreaded and parallel implementations. The essential is the development of methods that enable parallel computations. This goal is achieved by extracting independent operations and efficient scheduling and mapping either using a direct hardware approach or dedicated multicore processing architecture.